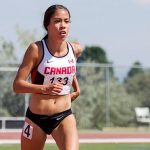 Maria Bernard (born April 6, 1993 in Calgary, Alberta) is a Canadian track and field athlete competing in the middle-distance events, predominately the 3,000-meter steeplechase.

In July 2016, she was officially named to Canada’s Olympic team.

An eight-time NAIA All-American in track and field, she was named the 2015 Herbert B. Marett Outstanding Performer Award winner at the conclusion of the NAIA Outdoor Track and Field Championships in Gulf Shores, Ala., after winning both the steeplechase (for the second straight time) and the 5,000-meter run at the national meet. Bernard set the NAIA championship steeplechase record in the preliminaries of the event in 2015.

She also claimed the gold in the steeplechase at the NAIA meet in 2014 and anchored UBC to a victory in the women’s 4×800 relay at the NAIA championship in 2013. (Wikipedia)

Results are in🔥, Congrats to all of our UCAC At

🔥2023 Dino Classic🦖 Congratulations to all